Remembering Why We Do Flame Hardening This Way 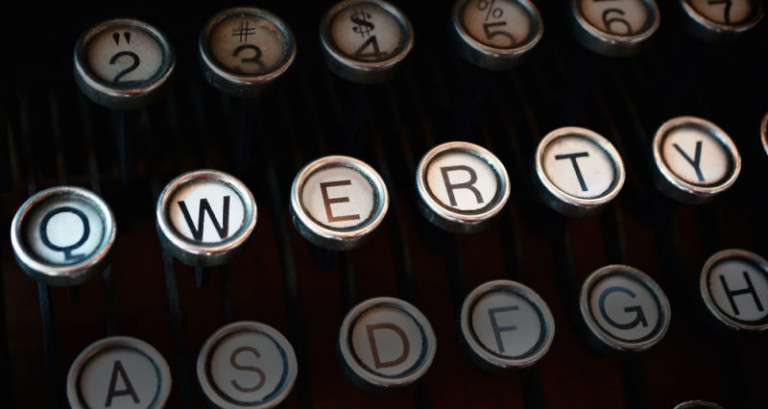 How many times have you caught yourself doing something a certain way and then wondering why you always do it that way? And realizing that reason no longer exists!

For example, why are standard computer keyboards laid out in the QWERTY method? Because back in the day of the manual typewriter, the keys had to be arranged so that the hammers for individual letters didn’t jam up together so easily. The QWERTY arrangement actually slowed typists down so the machinery wouldn’t bind up. Even though such concerns are decades in the past, in the year 2017, how are the keys on your computer keyboard arranged? The same way. The reason has changed – there are no longer mechanical issues, just human ones – because QWERTY is what we’re used to seeing.

A lot has been going on lately at Flame Treating Systems to make me recall why we do things the way we do them. For starters, I got a call from Charlie Hightower extolling the virtues of retirement down in Texas. Back in the 1960s Charlie worked with the group at Dow Chemical that included my dad, Mervin Sirrine, and several others such as Tom Reddick, Dick Green, Pat Bader, and Karl Schafer, who were tasked with finding industrial applications for Dow’s MAPP gas – a competitor to acetylene in heat treating and other industry. While Charlie and my dad have gotten a great retirement out of working through some heady years in American manufacturing, they both recall their R&D days at Dow’s “Pink Palace” suite of labs with genuine enthusiasm. It’s the way we used to work – throw a team of folks into a lab, give them a problem, and tell them to work it until they have a solution. Watch the old “Apollo 13” movie to be reminded of how much synergy gets released with a good team of workers who get put on a challenging project. Or look at the work of Bell Labs, innovation which has not been equaled since the breakup of Ma Bell. At FTSI we still do some of the things this Dow group figured out in the lab then – because those discoveries made gas-fired heating better, safer, and more predictable, and still do.

Of course it didn’t come easy. First Merv and Tom had to develop a torch that produced the amount of BTUs necessary using MAPP gas, which no one had done before, so it was an unknown quantity. They were particularly interested in solving the problems so often encountered by torches using acetylene – burnbacks and backfires – and came up with a reducer that virtually eliminated the problem. We’re still designing torches with that same eye on keeping the fuel gas, be it natural or propane, controlled perfectly with the oxygen mix so that the highest standards of safety and efficiency are met.

Of course, with a group of high energy young guys they also had a little fun along the way. They used to take small soldering cans, put MAPP gas in them and set them outside a couple hours and came back to find them the size of a football. Or they’d place a coffee cup upside down on a piece of plate, cut a hole in the top, then fill it with gas or oxygen then go by with the torch and blow it up to the ceiling. The best workplaces are the ones where laughter is heard and profits made!

When they got it right they took it on the road. So not only did the same team develop the applications for Dow’s MAPP gas, they sold it on the trade show floor. Adoph Atzmeirer developed a process for welding which manufacturers loved. They developed a steel cutting method by manipulating oxygen and fuel mixtures, almost to melt, then boosting the oxygen to it that sliced right through and went to quench. They set up a canister of MAPP gas on the show floor with a tank full of water. Then they’d heat treat a big sheave underwater, showing how hot the flame could get by running the torch under water in the tank. That proved the gas could burn as hot as acetylene, but with more stability and control.

Merv and his group experimented with all aspects of flame head and torch design to maximize temperature, control and consistency. For example, is it better to counterbore or not? – Only if you aren’t using acetylene. My dad’s work on these design issues, researching the properties of gases that have far-reaching performance and safety implications, still form the basis of my own work.

In its headlong rush toward robots and automation, I hope American manufacturing isn’t losing this innovative, problem-tackling spirit. It’s the heart and soul of industry. I know artificial intelligence means machines will be able to learn, but will they also bond together and bounce ideas off one another synergistically, and have so much fun at working out solutions that it stays with them for a lifetime, AND makes the company money to boot? Maybe automation increases profits and efficiency, but it seems like it also introduces a cost – a very human cost —  that doesn’t show up on a balance sheet.

I guess you can call me old-fashioned. I like working with other smart people figuring out solutions to tough problems that create value, whether it’s safety, performance, efficiency, profitability, or whatever value the customer seeks. I’m grateful for the teams of guys – they were mostly men – back in the day who took American manufacturing to the top of the world. May that way of working, and the discoveries and excellence it produced, never be forgotten. Think about that the next time you text on your smartphone’s QWERTY keyboard.

Let’s talk about what you’re working on and how you want to do it. Who knows, maybe we’ll solve some problems and have some fun. Call me at 919-956-5208 or email mark@flametreatingsystems.com.