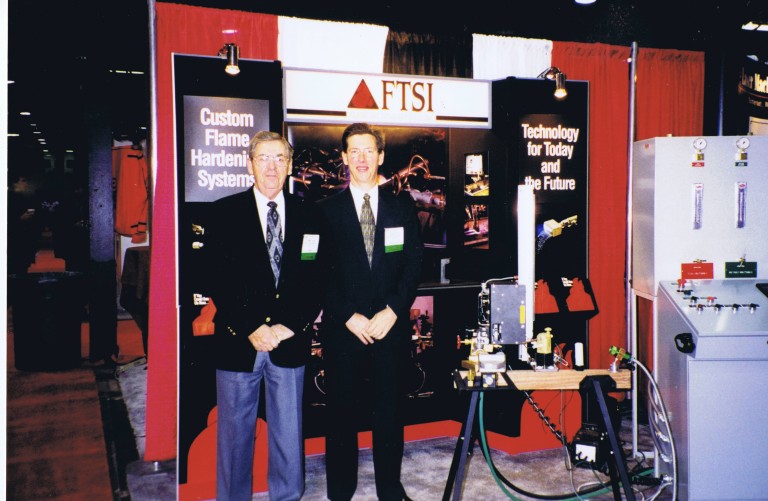 Men and machines. That’s been the story of the Industrial Revolution for the past 120 years. It’s the story of flame hardening as engineers have continued to build upon a timeless process to fine tune it and control it. And it’s the story for those of us in America who still believe that manufacturing is the backbone upon which all the country’s fortunes depend. When my dad started Flame Treating Systems Inc. in 1973 he came out of an American blue collar workforce that was smart enough to go to college, but didn’t have the resources to do so. Therefore folks like him moved into factory positions where they could innovate, create, and solve problems to make the line faster or easier. They became experts in the processes with which they were involved. And they had a sense of pride stemming from their involvement.

Today, where are these workers? Many labor experts lament the shortage of blue collar workers like these in America’s increasingly sophisticated and specialized manufacturing sector. Those who might have the motivation and aptitude nowadays often have access to college, and those who could step into these positions seem to lack either aptitude or interest to work in heavy industry that might require them to put down their smart phones and get their hands dirty. As the last members of the hands-on blue collar generation leave the workforce for the gold watch of retirement, how do companies replace their expertise or their love of manufacturing?

We alluded to this question in an earlier blog, but decided the problem is significant enough to warrant a blog post all its own. Especially when you’re talking about a process like flame hardening which can be constructed by industrious laborers who build their own torches and tanks and produce hardness depth and patterns within reasonable quality specs. In cases like this the operator usually has years of experience in trial and error to produce a flame the exact temperature for the application, and has devised some sort of line that handles the material exactly the way it needs to be for the required hardness pattern. The operator usually uses his senses – mainly sight and sound – to determine when the flame is hot enough and when it’s been applied long enough. When this operator retires, some companies scramble to try and transfer his or her knowledge to someone else.

But even if you could do a brain dump and transfer the knowledge, depending on the human senses to monitor the flame hardening process introduces risk to quality. Doesn’t the push for fewer operators and more robots come out of concern for exactly this risk? My dad was way ahead of this game. Back in the 1980’s he conducted an experiment in a flame hardening shop. He took one flame hardening station, an operator took another, and the owner of the shop took a third. They all had to turn on their respective torches and produce flames which they considered the right temperature and pressure for the required hardness depth. They didn’t know the flows of fuel gas and oxygen, they were only using their eyes and ears to determine the intensity of the flame. The flows were measured for each one and revealed that for each one, the temperature and intensity of the flame differed. Each operator had a different sense of when the flame was right to produce the required hardness. A second test was conducted next, where each operator was asked to reproduce the flame he had just measured, just using his senses. Each operator’s flame was a different heat and intensity than the first flame he had produced as a “ready production” flame. My dad was convinced by these tests that repeatable, quality flame hardening couldn’t be done using human senses alone. Oxygen and fuel gas needed to be measured and documented to reproduce the levels that would guarantee a quality depth and pattern every time. And he built a company based on that philosophy.

That’s good news for today, when reliance on operators is more of a liability than ever. Our flame hardening machines still need skilled operators but their skills do not include being able to “eyeball” the right flame temperature by sight. They need to read and set flow controls that produce that temperature and intensity. They need to be able to change programs when different parts require a change in depth. They need to be able to measure and understand quench temperature and mixtures. We help train folks in all these automated processes so that people using our equipment aren’t worrying about repeating the right process, they only worry about ensuring they are doing the right process. And they take pride in mastering a process that’s loud, hot, and transforming the structure of equipment weighing hundreds of pounds.

I hope this helps those of you frustrated by finding good help. I understand your frustration and am designing solutions to help you with it. Don’t hesitate to email me at mark@flametreatingsystems.com for answers to any of your heat-treating questions. Or call me at 919-956-5208. It might take me some time but I will get back to you! Thanks for visiting our website.